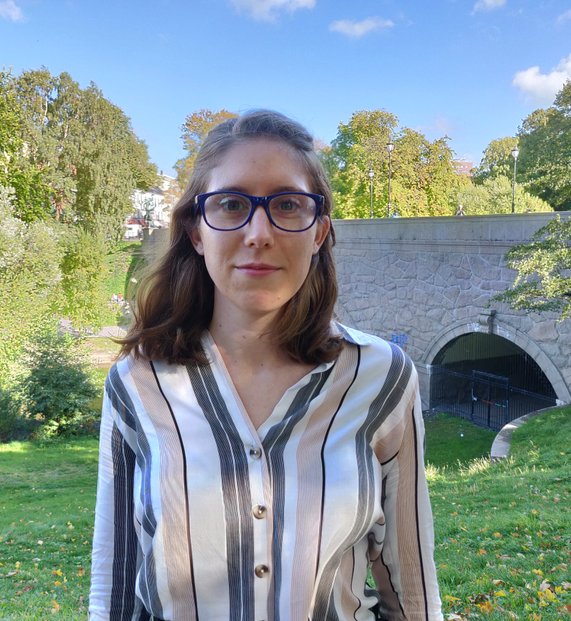 Woman Of The Week

She is currently finishing her PhD in Urban Studies at the University of Glasgow, in Scotland. In addition to studying for her PhD, she is involved in a social enterprise called SammTalk.

Could you tell me about your background?

I am originally from the United States. I grew up there, and then I studied in Scotland. The reason I ended up in Norway was because I moved there on an Erasmus+ traineeship. I was working as a trainee teacher at Lørenskog Videregående skole just outside of Oslo. Then I went back to Scotland, to continue studying, but I missed Norway, so I decided that for my PhD in Urban Studies, my case-study would be Oslo. I went back to Norway for some time, to collect my research.

Do you know what you want to do when you’re finished with your PhD?

Yeah. The reason I was actually involved with #WeWomen in Oslo was because of my involvement in a social enterprise there. When I was working as a teacher trainee, we started this program called SammTalk. It works to connect schools for online language practice, it’s like a digital pen-pal program. I am still working on that, while in a moment of transition, because I am finishing the thesis and thinking about what I want to do. I might like to have a job within a research institute, or maybe at a university back in Scandinavia, but I am also quite happy working for our social enterprise at the moment. It’s small, and it’s growing slowly, but it’s going in the right direction.

Could you tell me more about SammTalk?

The first year I lived in Norway during the teacher trainee program, our boss actually put all the trainees together in a house - we all lived together, and it was a lovely time. So, I lived with two other teacher trainees, and one of those was a guy from Spain. He had the idea to start this program. In the beginning it was centered around Skype-exchange, and I found it very interesting and wanted to be a part of it. Originally it was just a school in Norway and a school in Spain. The teachers loved it, but we could see so many ways in which it could be improved, so we started making our own curriculum… then we started thinking “what if they could share videos or text chats too?” In the beginning it was all in Facebook groups, a class from Norway and a class from Spain, sharing things together throughout the year. Now, we have our own platform that is custom designed for this purpose. Now, there are schools in Norway, Sweden, Denmark, Holland, France, UK, Spain, and several more countries involved in the program.

It’s been really nice overall, and we have gotten so much positive feedback. Since we come from a teaching background it’s been easy to get in contact with other teachers and exchange ideas. We love talking to the students as well. SammTalk offers sustained, accessible language practice that’s too often missing in a classroom setting. Plus, students in the program get to connect with other young people abroad and that can be very special experience.

Karen told me you were one of the first members of #OssKvinner, how did you hear about the project?

I heard about #WeWomen originally through the Latin American Association at the University of Oslo. I first got involved in the project when there was a seminar regarding women in business with Innovation Norway. I sent Karen a message and asked if she needed more people for the event. I told her that it seemed like a lovely event and I was keen to be a part of it. That was my first event, and then, after that I was part of the Christmas marked at OsloMet. Later, we had the first ever Job Fair at the library at the University of Oslo.

Since #WeWomen is all about empowering and highlighting strong women, how do you think we can we empower women?

That’s a big question. I think making workspaces, offices, spaces in general more accessible to women is important. Even just physical office spaces or the hours of a normal job are all designed around men. The whole system is designed to accommodate men in traditional types of jobs. I think more flexibility in terms of working hours and workspaces would be helpful. And imagine different types of business models. There has been a push to get women into corporate systems, achieve 50/50 gender balance in the workspace, but there are so many different ways of doing business that could be introduced that could be better for everyone. I am thinking in terms of social enterprises and those sorts of things. Women might be more inclined to pursue these opportunities if it’s not run by ultra-capitalist traditional attitudes.

As an example, I remember this “women’s empowerment conference” where they asked me to speak and I was so annoyed because the cost was really high, and they didn’t have childcare at the event. The only thing I could think of was “if you’re trying to get women to the event, you might need some better facilities and ways to include a broader range of women.” People want to include women, but they don’t think of really obvious things. They need a more family-friendly, child-friendly attitude.

Another thing that keeps coming to mind, since my PhD is in Urban Studies, and I am very interested in urban spaces - yesterday, I was out for a walk and they have these public toilets… there were three outside urinals for men, and just one bathroom for the women. Research shows that women need to use the bathroom more often, and yet there are fewer options for us. Everywhere you go this is the case. There is often a line of women waiting for bathroom, but always available options in the men’s bathroom. Developments in public infrastructure, just small things like bathrooms, would make life easier for women in particular.”

Do you have any advice for women who would want to do what you do now? How did you get to that place?

I have been extremely lucky because I’m a white, educated, middle class person from the United States. Yes, I am foreign to Europe, but everything is unfairly easier to me compared to how it is for many people in the world. That said, I think not being afraid to get started and ask people for help is important. I think that is the main thing. I remember talking to women that had ideas for a business, but they felt they had to wait, and all I could think was: “Just start. If you want to start, and you’re ready, then take the first step.” There is no perfect moment. There exist groups like this (#WeWomen) that can help. Be willing to ask others for help and don’t be afraid to get started.

Do you have any concluding advice?

Talking to people is the main thing. There are so many free resources as well. Sometimes you don’t even realize you can just Google something. Having a connection between people with ideas is important  people will hopefully be generous enough to say “Oh, have you seen this resource” and guide you towards all these free resources and tools that can help you. Previously you needed a lot of money or skills, but now you can make your own videos, website, or posters. So many things are possible now.

Would you like to know more about SammTalk? Visit their page here

Would you like to know more about Taylor and her publications? Visit her University page here